Note: The online build service is free for public GitHub repositories. To built from a private repository, you need a developer account. To build an app locally you need a pro account.

Note: The .tabrisignore file is only relevant for the build service. In a local build, you have to manage the packaged files yourself (see below).

Note: The build service installs the dependencies specified in your package.json from npm (except devDependencies). As a result, you don’t have to put the node_modules folder under version control. 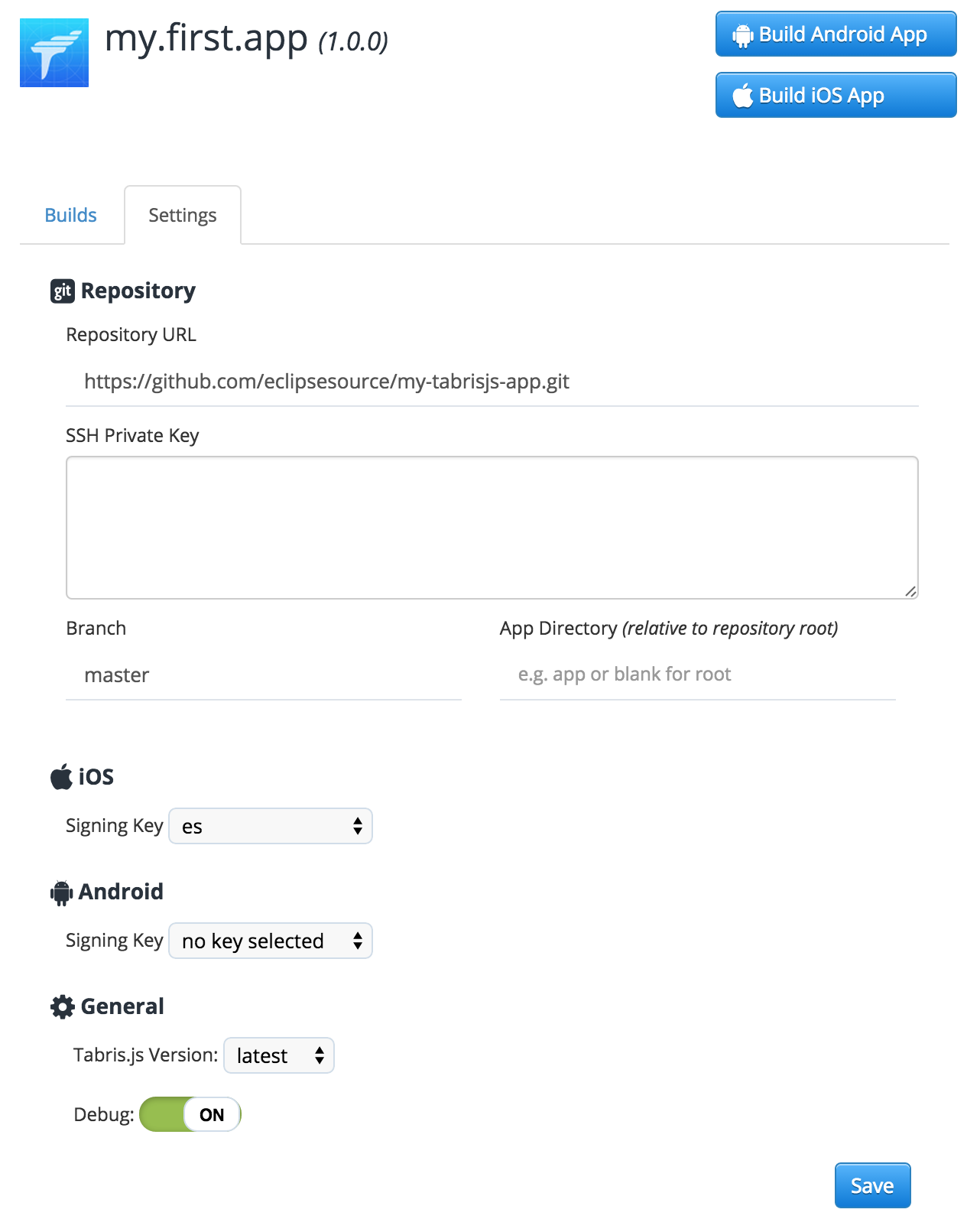 To add a set of Apache Cordova Plugins you only need to add them to the config.xml. The online build supports the <gap:plugin /> tag that you might already know from Phonegap Build. This tag allows you to add plugins using an ID, an HTTP or a git URL. A sample config.xml including two Cordova plugins could look like this:

Please Note: You need to include the gap XML namespace in the root element of your config.xml file, as seen in the example above.

You can build Tabris.js apps on your local machine using the Cordova command line interface.

If you’re targeting iOS you will need MacOS, while Android apps can be build on any OS that is supported by the Android SDK.

You also need a Cordova installation. Follow the Cordova Installation Guide and install the latest Cordova version on your system.

The Cordova CLI expects a standard directory layout. That is, the config.xml is required at the root of the project and a www folder must exist which contains your actual Tabris.js app.

This directory structure can easily be created using the cordova create command as described in the Cordova CLI Guide. After creating the project you will have a typical Cordova project layout including the www directory. The default content which was created automatically is not needed and can be deleted.

Tabris.js ships two custom Cordova platforms. This includes platforms for iOS and Android. Visit the Tabris.js download page and download the platform of your choice.

Please Note: Local builds are a Pro feature. If you don’t see the download you are probably not on a Pro plan.

Extract the content of the downloaded archive and add the platform to your project using the cordova platform add command. You need to append the path to the download platform. E.g.:

or for Windows users:

You can integrate all available Cordova Plugins using the cordova plugin add command. Read the Cordova Plugin Installation Guide for a detailed description of this command.

An example of adding the Cordova Camera Plugin will result in this command:

Important: You can install all available Cordova Plugins. Most of the Plugins will work out of the box but not all. This is because Tabris.js uses a native UI and no HTML5. As a result all Plugins that manipulate the DOM will not work.

The code of a Cordova Application is placed in the www directory. This is where you need to place your Tabris.js project files (package.json, node_modules folder, and all your own modules and resources).

To run an app, use the cordova run command as described in the Cordova Emulator and Device Guide.

Building an app is just as simple. Use the cordova build command as described in the Cordova Build Guide.