Tabris provides a decorators-based dependency injection via the 'tabris-decorators' extension, which has to be installed in addition to the tabris module:

Dependency injection via decorators works only with TypeScript/JSX projects. Mixed projects work as well, but the modules using the extension need to be .ts or .tsx files. It’s strongly recommended to familiarize yourself with the basic decorators syntax if you aren’t already.

The core idea behind dependency injection is that any object (the “client”) that needs to interact with another object (the “service”) should not be responsible for the creation or management of that other object. Instead it is “injected” by a third party. For Tabris.js this “third party” can be the Injector provided by tabris-decorators.

Most of the time there is no need to interact with the injector directly. Instead, decorators can be used to both register classes for injection and to inject them via a constructor parameter. However, the initial object of any dependency tree (usually something that kickstarts the application) always needs to be created explicitly.

The Tabris dependency injection service is integrated with the declarative API. Any class (usually custom UI components) that is instantiated vis JSX will have its registered dependencies resolved automatically with no additional code.

The following data binding related decorators are exported by tabris-decorators:

In a sufficiently complex application you may eventually create circular injection dependencies causing errors. One way to resolve them is to re-structure you code, which is usually the best approach. If this is not possible, there are indeed ways to make circular dependencies work.

Consider a scenario with the following classes: 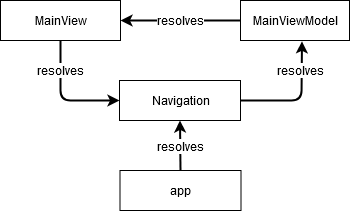 Assuming you are using the @inject decorator on constructor parameters to resolve the dependencies this will definitely not work. To fix this you need to break the module dependency chain and/or resolve one of the modules “lazily”. 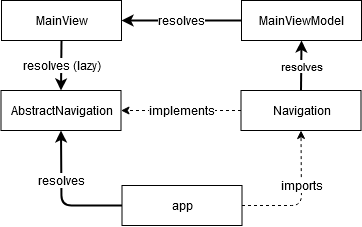 The specific approach depends on what error(s) you are getting:

If you are getting errors mentioning “circular module dependencies” you must break the module import chain by splitting one of the classes in to an abstract class and a concrete class. So instead of this:

You must do this:

And then in a separate module this:

Note: The class names here are chosen for clarity, you may call these whatever you want. Even identical class names will work since you can rename classes on import.

Now you can use the abstract class to resolve any dependencies to the concrete class. Since there may now be no explicit dependency on the concrete class anymore you need to import it in your app module. Make sure you do this before any module that will inject it:

You may still be getting “Circular dependency injection” errors. This is the case if every class in the injection chain resolves the next class immediately on creation, e.g. when injected via constructor parameter:

To avoid this you have to “lazy” resolve the next class outside the constructor. This can be done in two ways:

1: Use resolve in a method not called in the constructor, e.g.:

2: Inject the next class in a property that is not accessed in the constructor:

In plain JavaScript projects decorators are not supported. However, you can use the Injector directly as this example demonstrates.